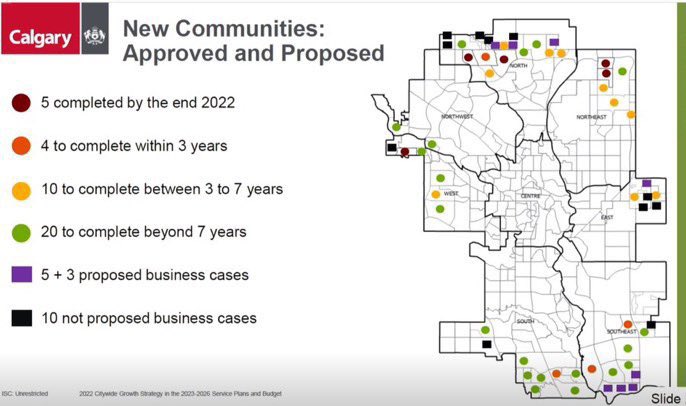 shows how much land is already approved for development

City Council has voted to approve eight new developments which would add one per cent to Calgary’s GHG emissions. Calgary already has a 20 year supply of land designated for suburban development in 39 communities. Adding more will mean destroying over 300 hectares of natural assets, put more cars on the road, and increase our exposure to climate hazards, as well as committing The City to spend an additional $5 million in annual operating costs, leaving less money for other needed infrastructure and services. Read more on Global, CBC and Live Wire.

One of the communities slated for development is Ricardo Ranch, among the last intact riparian ecosystems on the Bow River in Calgary. This fragile area features productive wetland areas full of birds including one of Calgary's last remaining Great Blue Heron rookeries (nesting areas). Biological experts recommend a setback of 1000 m to protect this sensitive area, but the developer is asking for a relaxation to 750 m instead. Other species include Solitary Sandpipers and Bank Swallow colonies, a listed species. These areas will come under increased pressure from 16,000-20,000 people if development is allowed to proceed. Read the Area Structure Plan here. From the river to the escarpment is valuable habitat and should not be covered with houses as planned.

Read about the next opportunities to influence the development here.

Development is creeping downstream along the river valley towards Ricardo Ranch.

This development in Cranston was once habitat like Ricardo Ranch.

Speak Up! Email City Council telling them to save the most sensitive areas of Ricardo Ranch from development

Tweet
Become a Member
Make a Donation
Become a Volunteer
Ask Council to save critical habitat at Ricardo Ranch! #yycclimate #yyccc #yyc via @ClimateHubYYC
Save Ricardo Ranch!
Welcome to the Calgary Climate Hub!