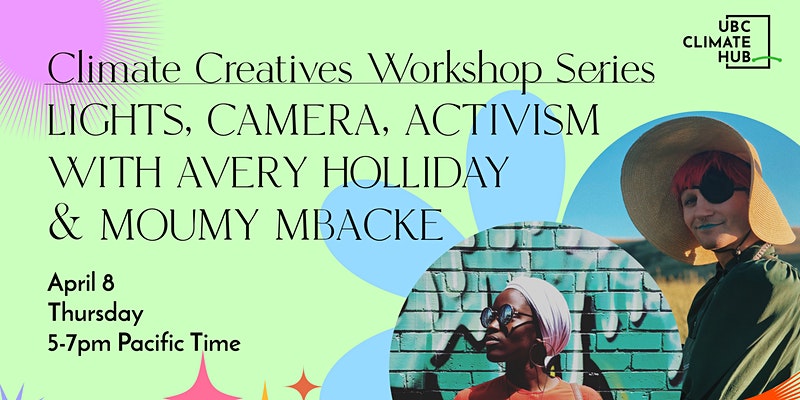 Art is an important part of the climate movement because it generates new questions and possibilities, and enables us to imagine and build new worlds. Through art-based pedagogy, the Climate Creative Workshop Series aims to nurture students and community organizers to dream just and resilient futures beyond fossil fuels, mass extinction, policing, segregation and exclusion, and to explore different artistic mediums as creative work of care and movement building.

Our fourth workshop will be led by Avery Holliday and Moumy Mbacké. The workshop will delve into the ins and outs of the video production process from inception to completion. Using their recent collaborative project as a case study (“Racial Justice is Climate Justice”), Avery & Moumy will explore how film, video, and social media have the power to garner support and raise voices of those engaged in climate activism. From documentary features to Tik Tok, video is a vastly adaptable creative medium for participating in the movement!

About the workshop leads:

Born and raised in the Middle East but of West African descent, Moumy Mbacké is a filmmaker currently based in “Vancouver”. Her love for storytelling started out in photography before finding its roots in the moving art. Always fuelled by the beauty and complexities of what it means to be human, she self-produced and funded her first major project in 2018 titled “On The Topic Of” - an award-winning documentary web series on women & their perspectives on Love, Self, Age, & Strength. While continuing to develop more ideas for independent work, Moumy predominantly freelances as a video editor.

There is a capacity of 30 attendees per workshop. Please only register if you are sure you are able to attend. If you would like to reserve a spot when any opens up or for our next workshop in the series, please register via the Waitlist ticket option. This event will not be recorded.

RSVP for this and other workshops via the UBC Climate Hub webpage.