A recent poll shows that 73 percent of Calgary’s citizens believe that investing in climate change is an investment in long-term economic sustainability and prosperity. 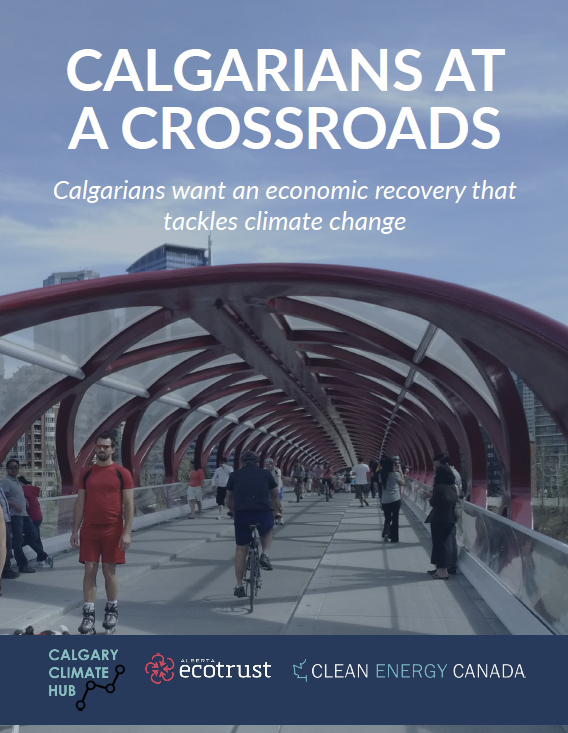 CALGARY, Sept. 8, 2021 — Alberta Ecotrust Foundation, Calgary Climate Hub and Clean Energy Canada announced today that a recent poll shows 63 percent of Calgarians believe Calgary’s future as a vibrant city is at risk if we do not become a leader in addressing climate change. The findings from the poll, commissioned by the three nonprofits and conducted by data science and behavioural economist Brian Singh of ZincTank in August, found that over half of Calgary’s citizens (57 percent) want Calgary to chart a course for a more sustainable and resilient city by investing in the transition toward clean energy.

Calgarians are worried about the future, as 53 percent do not believe that Calgary is on the right track to be a better city 10 years from now. Plus, well over half (69 percent) of Calgarians are concerned about climate change impacts. The data indicates that all levels of government need to invest in Calgary’s economic and environmental future to build a resilient city that supports individuals, families and small businesses through the transition.

See the dataset of polling results or download the report. (PDF)

“It is clear that seven in ten Calgarians believe the transition to renewable energy will ultimately improve the health and well-being of themselves and their families. Calgary’s municipal candidates must include bold climate change plans in their election platforms to protect the health of Albertans.” - Joe Vipond, co-chair of Calgary Climate Hub and emergency physician at the Rockyview General Hospital.

“A majority of Calgarians do not want to continually choose between the environment and long-term economic sustainability and prosperity. They want environmental actions that solve multiple challenges at once. That's why our Climate Innovation Fund will support the City of Calgary’s leadership on climate action with programs that focus on retrofitting existing buildings, installing solar, and electrifying transportation; both creating jobs and accelerating emissions reductions.” - Pat Letizia, president of Alberta Ecotrust Foundation.

The poll also shows that:

“Calgary is Canada’s energy capital, and that doesn’t need to change. Alberta is home to many skilled workers, the best wind and solar resources in the country, and a number of other clean energy opportunities such as geothermal and hydrogen. But in order to turn this promising potential into a resilient reality, action needs to be taken today at every political level. Calgarians are ready for it.” - Trevor Melanson, communications director of Clean Energy Canada.

“Calgarians are looking toward diversification and renewal, at which climate action needs to be integral to any strategy. There is a desire to transition from fossil fuels with support from all levels of government. There is a need for any economic plan to have climate action embedded in and at the forefront of it.” - Brian Singh, data science and behavioural economist of ZincTank.

The data also shows that Calgary’s citizens support policy actions, specifically that address the future of the transportation and infrastructure sectors:

Calgarians want future economic and community investment to align with environmental actions so they, and their families, can have a vibrant and prosperous future. Calgarians should ask their municipal candidates how they plan to stimulate the economy and invest in healthy communities while taking action on climate change.

From August 5 to 15, 2021, ZincTank conducted a poll of 1,000 citizens from Calgary, Alberta. Respondent quotas were established to ensure data is population representative. Data presented was weighted to reflect the population of adults 18 years and older. Data obtained was rebalanced by age, gender and quadrant as per the 2019 City of Calgary Civic Census (the most recent available). Those eligible to vote represented over 98% of respondents. An Internet panel was selected as a means for data collection given the length of the survey, and that 90%+ of Calgarians are online. The incidence rate was 84%. Total contacts – 1,704. Breakoff (Incomplete) – 291. Termination (Out of Calgary, Under 18, Over quota) – 413.