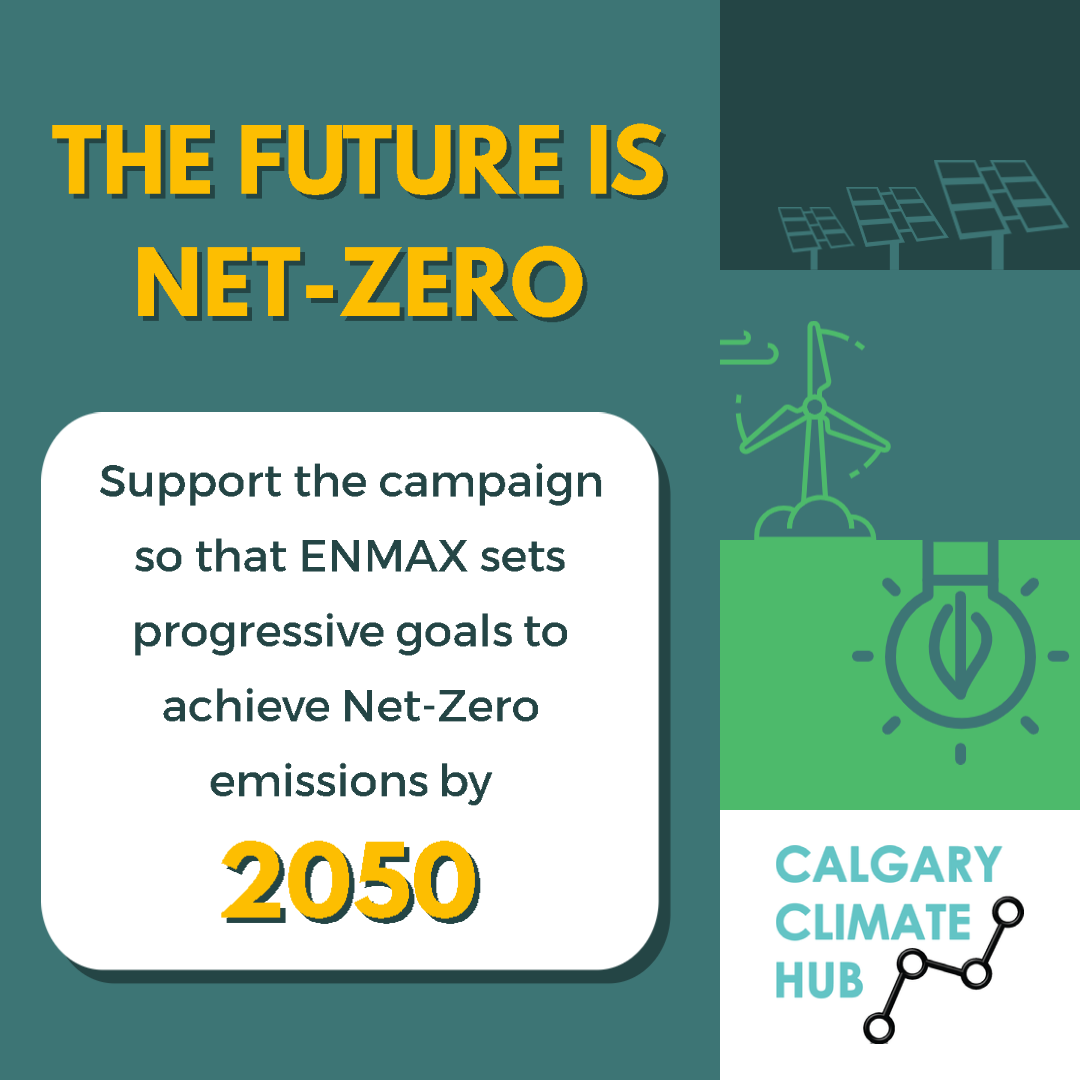 The shift to electrifying our homes and vehicles has already started, but what about the sources of our electricity?

We need to act now to make sure our city-owned utility moves away from adding more GHG emissions to the atmosphere.

It's time to ask ENMAX to commit to net-zero emissions by 2050.

The Hub is asking for your help. Will you add your name to our open letter to ENMAX?

Let's work together to ensure a brighter future.

Dear Mr. O’Connor and ENMAX Board of Directors,

As citizens of the City of Calgary, ENMAX’s sole shareholder, we call on ENMAX to declare a net-zero GHG target by 2050. This will make ENMAX’s business compatible with Canada’s net-zero by 2050 target, Canada’s obligations to the Paris Agreement and our responsibility to ensure a stable climate for future generations.

Investors are increasingly demanding real, measurable action on mitigating climate change. As citizens of Calgary, we deserve the same from our municipally-owned utility. We demand that ENMAX embrace and deliver on targets of:

These targets may seem bold, but they are the new normal across North America. In response to investor and consumer demand, similar pledges have been made by Arizona Public Utilities, Xcel Energy, Duke Energy, DTE Energy and Southern Energy. In Calgary, oilsands companies MEG Energy, Cenovus and CNRL, along with mining company Teck Industries have all committed to operating net-zero. Our federal government recently pledged a similar target for the entire Canadian economy. President-elect Joe Biden has gone further and promised to make all electricity in the United States net zero by 2035. ENMAX is being left behind.

The fact that utilities, oil sands majors, our federal government and the US president-elect are all making the same commitments to net zero business shows that net zero emissions isn’t only ethical, but good economics. U of C economist Blake Shaffer says that “it's actually cheaper to build and generate renewables than it is to run existing power plants.” Net zero electricity is already good business.

ENMAX has moved in the right direction by eliminating coal generation, doubling solar capacity, and generating 14 per cent of electricity through wind power, however, we need to decarbonize far beyond that to be on track to stabilizing our climate.

The future can be full of promise: healthier air, a stable climate, affordable electricity and profits for ENMAX. We need a net-zero GHG target to bring about that future. The alternative is no longer an option.

PLEASE act now! We need this leadership in Canada, and especially in Alberta.